Security Dogs Vs Security Guards: Which do you need?

Home / Security Dogs Vs Security Guards: Which do you need? 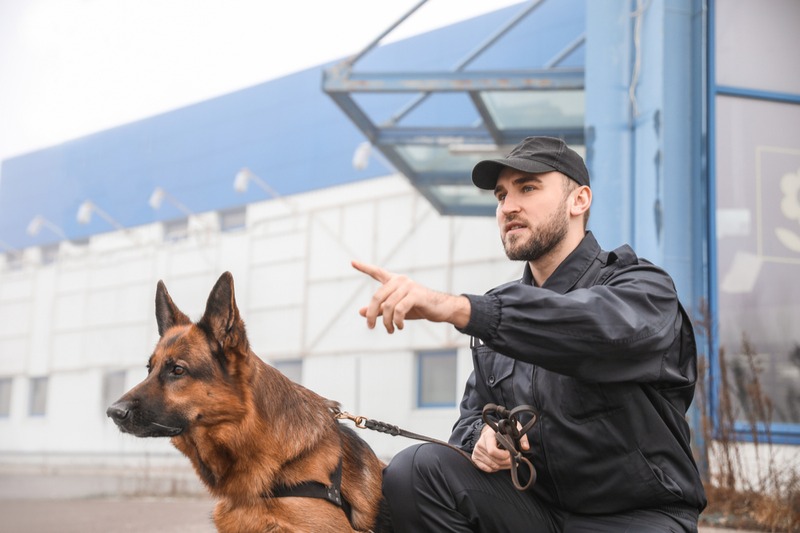 When it comes to drug detection, sniffer dogs cannot be beaten. People will always feel uncomfortable being searched by another person, even if they’re not guilty of hiding anything illegal. The simple act of physical inspection is made complicated due to certain laws and many take a dislike to authority figures carrying out physical searches (especially if a crime hasn’t already taken place).

A security dog, however, can detect drugs by smell alone; bypassing the need to pat people down altogether. This makes drug detection faster, more accurate, and less likely to cause offense to the many people that they search. Someone might be able to hide a lump of powder or pills where a security guard won’t or can’t reach, but it is very difficult to hide narcotics from a dog’s nose which is highly sensitive.

Just seeing a security dog and handler could make some people carrying prohibited drugs leave the scene, too. The unpredictability of the dog might make them less confident to try and get away with something that they previously might have attempted if there was just a human on duty; you can always try and reason with a person, after all.

For event security, a combination of security dogs and guards might be appropriate. Dogs may have an incredibly heightened sense of smell, but they’re still no match for humans in a battle of brains. Sitting, rolling and playing dead are good party tricks but don’t offer much when complicated decisions need to be made with large crowds.

Take a night club for example – There may be a guest list where nobody else is permitted to come in. In this case you’ll need security guards on the door. If there are dogs there as well, you’ll also need security guards there to handle them too. It is now against the law for an unmanned security dog to be on site.

You’ll notice that offenders act a lot less aggressively when they are around a dog and their handler; they know that these specialist dogs are trained to strike if there is a threat of violence. The sheer presence of a trained security dog is usually enough to stop people from getting aggressive. If, despite the dog’s presence, somebody still chooses to be aggressive, they’ll quickly face the consequences of this.

Using security dogs alongside security guards could vastly cut down on the amount of aggression you face in the line of work. If for example you need security for an event, you can reduce the likelihood of aggressive offenders with security dogs, creating a nicer environment for customers and staff.

One area in which dogs are perhaps a little lacking, is clear communication. Being able to communicate with other guards can be important to maintaining control over a large area and when organising large crowds.

While dogs can act on certain commands when taught them, a comprehensive two-way conversation is beyond the four-legged animals. Dogs can follow simple instructions, but in situations where complex communication in regard between a team, security guards can’t be replaced.

County Security UK are specialists in supplying security guards and security dogs for all purposes. By utilising County you are ensuring that you have experts with heaps of experience in operating within the commercial and events sector. Our K9 security and security guard services are provided at a fixed fee competitive rate, so we can cater to your budget.

If you’d like to discuss security for an upcoming occasion, please reach out to our team.

Having security dogs is a practical and cost-effective approach to providing additional security in a variety of situations. Dog unit security are quite valuable for any site requirement and provide a distinct outlook when utilised for security. Humans see life mostly via sight, however, dogs use their sense of smell to detect and pick up […]

What security guards can and can’t do

Complete this simple form and a member of our team will be in touch with you shortly.

We use cookies to ensure that we give you the best experience on our website. If you continue to use this site we will assume that you are happy with it.OkMore info